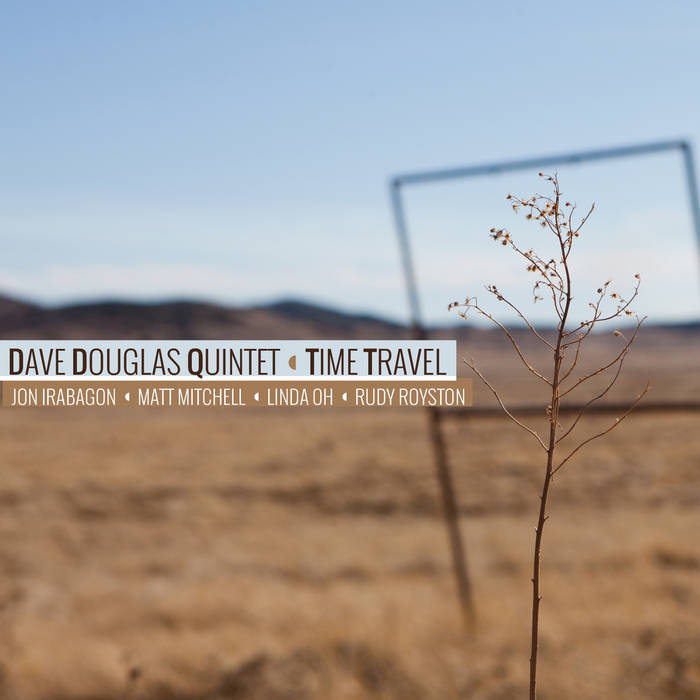 Kenneth Pyron This album feels as if it could have been released in the late 50's, except for it's thoroughly modern approach. It's first class musicians working with first class material. It's been a consistent 'go-to' album since I purchased it.

"Time Travel" by the Dave Douglas Quintet is the all-instrumental follow-up to the critically-acclaimed "Be Still". Even with the identical personnel (sans Aoife O'Donovan) "Time Travel" is its own statement. "I was really interested in what David Toomey wrote in his book The New Time Travelers," Douglas says. "How the concept of time travel has been around a long time, and how it is evident in the way we think and the way we create: backwards, forwards, all directions at once, beyond the speed of light, rearranging our understanding of cause and effect."

A complete set of sheet music is available that includes all of the Douglas compositions on this album. Purchases the scores as PDFs here: bit.ly/SM_TimeTravel

"While Douglas has made his mark delving into various genre-crossing projects that often skirt the edges of hardcore improvisatory jazz, with Time Travel he has found just as much room to explore within a world of jazz possibilities."
Matt Collar, All Music Guide

"To many, he represents the epitome of the independent artist, who despite the difficulties of a shrinking music industry, has managed to find his niche and flourish doing it his way."
Ralph A. Miriello, The Huffington Post

"the quintet soars on this...sophomore effort. Unconstrained by thematic concerns, Douglas demonstrates his all-encompassing aesthetic, revealing a broad capacity for expressionism."
Troy Collins, All About Jazz

"Time Travel seems like a maturation, or an evolution."
Steve Holtje, eMusic

"Douglas’ genius is not only as a composer and a player but as a bandleader."
Alan Young, Lucid Culture

"The title seems appropriate for a musician who, like all great artists, reaches for something timeless."
Cormac Larkin, The Irish Times

"Douglas' music always is delightfully hard to define, roaming on this album from a post-hard-bop...to...the slow movement of a symphony...his tone never fades from its strength and fullness. He has range that he uses appropriately, making him a master of the horn."
Bob Karlovits, Pittsburgh Tribune, Review

"As a composer, Douglas is a deft hand, paying scrupulous attention to harmony and rhythm while still allowing for maximum improvisational freedom..."
Jason Bivins, Dusted

"Long time followers of Dave Douglas know he’s not going to bring the freak every time out, but he delivers on quality ensemble performances. He does just that for Time Travel..."
S. Victor Aaron, Something Else Reviews

"One of my favorite things about Dave Douglas is that he is always doing something new, yet no matter how different a new project may be from his last, it still has his stamp all over it. It’s a testament...that he is still able to surprise."
Chris Robinson, OutsideInsideOut

"Time Travel is yet another triumph for the sometimes chameleonic Douglas, who breathes fresh life into the concept of the classic quintet lineup."
Martin Kasdan, Louisville Music News

"Time Travel, a set of modern jazz compositions penned by Douglas, acts as a companion piece to Be Still -- an album with vocals, based on hymns, folks songs and traditional music -- than a sophomore effort."
Michael Hamad, New Haven Advocate