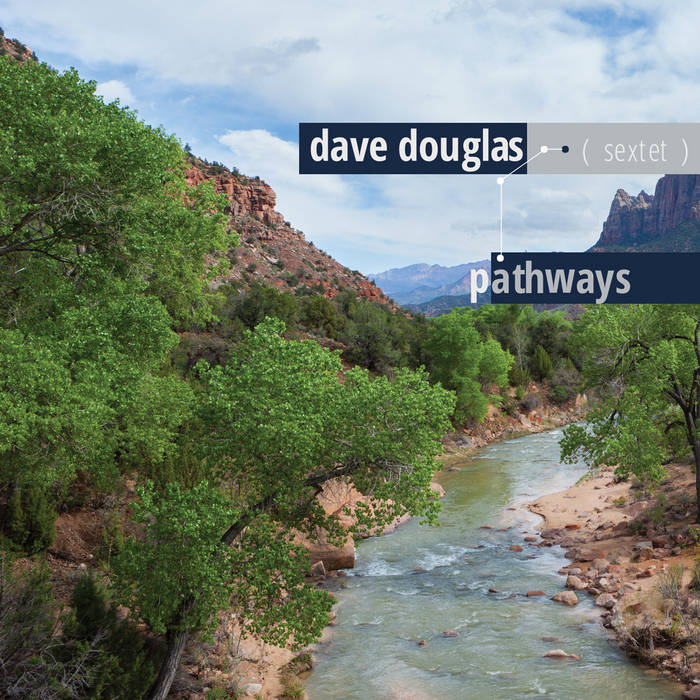 Pathways is a suite of Dave Douglas music commissioned by the Banff Centre for the Arts in Alberta, Canada for Douglas’ final year as director of the International Jazz Workshop in 2012.

Heartfelt thanks to everyone at the Banff Centre for the Arts for so many years of joy and growth. Pathways was created thanks to a commission from the Centre. It was first presented on June 9, 2012 at the final concert of my 10 years directing the Banff International Workshop in Jazz and Creative Music.

Gratitude especially to Mark Wold, Theresa Leonard, Jeff Melanson, Janet Amy, Chris Segnitz. Lynne Huras, Graham Lessard, Simon Gamache, the McKinnon Family, and all of the participants and visiting artists of the 2012 program. Special thanks to Jake Schepps for talking me down off the Dragonback. Special thanks also to Jerry Granelli for sharing the voice of the pine marten. Thank you especially to Michael Bates, Mark Micklethwaite, Angela Morris, and Pat Reid for being so indispensable in working for the program. I couldn't have done it without you.

Over a number of years the creative challenges of the program led me to some deep thinking about what it means to learn to create music as an improviser and as a composer for improvisers. It brought me to think differently about the origins of my own work, and that became a major part of how I approach sharing music and ideas with other musicians. Being a part of that program was a life changing experience.

Pathways brings together many of the inspirations that became crucial elements of the Banff experience. All of the pieces are based in one way or another on the Bach chorale 'Es Ist Genug', which we sang and dissected in multiple years. Aoife O'Donovan was a first time visitor to Banff, thanks to the generous support of the McKinnon Family Endowment. In the opening piece Aoife sings a re-harmonized version of the chorale melody more or less straight, with a beautiful lyric she adapted from several sources. The other pieces explore variations of the material, each piece featuring a different player in the ensemble.

I was delighted to be able to reunite many of the musicians of my Sextet who also joined the campus as visiting artists. Clarence Penn was a multiple attendee, his approach to talking about jazz and musicianship influenced me greatly in guiding the program. Uri Caine has been to the campus previously in other capacities, and this was the first time he had joined our program. Greg Tardy and Joshua Roseman were also first for us, and shared their awesome insights into the art. Linda Oh was a first time faculty member who I first met several years ago when she attended as a student. I am grateful to all of them for getting inside the piece and resonating with me the feeling for the content.

Another aspect that comes together here is the invitation by the Audio Department of Joe Ferla, one of my longest term collaborators and friends. Joe's presence added a sense of security and confidence as we dug into the new music. He worked the magic he has worked on my records for so many years. It was heartening to see Joe interacting incredibly generously with the students as well.

The record is a summing up for me: of the great affection I have come to hold for Banff, of all the wonderful young musicians who have attended the program, and of all I have learned as a result of those interactions. It's also an appreciation of all my experiences in the great outdoors, so majestically present in the Canadian Rockies. And of a great partnership with these fine musicians. The unity of purpose in these compositions matches that of the other recent transitions in my life. I am ever more grateful to have the opportunity to mark their passage in music. I know these Pathways will lead to new, unknown trails, and I relish the next adventures.