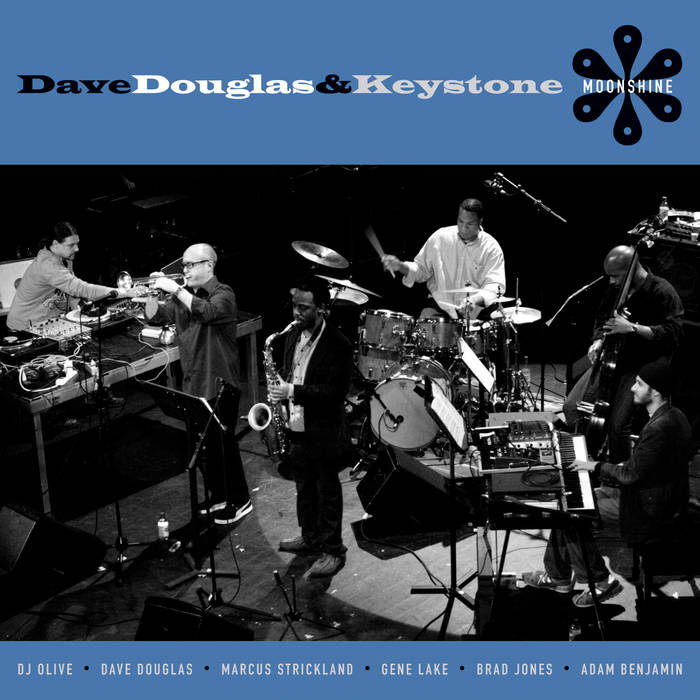 Moonshine, by trumpeter/composer Dave Douglas with his Grammy-nominated band Keystone, is an album that moves musical genres forward into uncharted territory. The evolutionary, revolutionary aspect is found in the vibrant alchemy between Douglas’ avant-garde leaning compositions, the relentless, polyrhythmic funk of drummer Gene Lake and bassist Brad Jones, the Sun-Ra-esque sonics of Adam Benjamin who plays a highly modulated Fender Rhodes and the post-post blowing of the front line featuring Douglas and saxophonist Marcus Strickland. But what puts this one over the top is the true integration of a DJ, in this case DJ Olive, into the constantly shifting improvisations of a cutting edge band. Rolling Stone called Keystone’s 2005′s self titled album, “a modernist requiem.” Moonshine takes it a step further: a modernist recipe for the future sound of electronics, jazz, and new composition.

". . . it's hard to imagine much more from a modern jazz record than what ‘Moonshine’ delivers."
Marcus Crowder, The Sacramento Bee

“Moonshine is filled with dense, seductive music . . .” “. . . ranks with the strongest in his large catalog.”
DownBeat

“This irresistible, nuclear-powered jazz proudly stands on its own, combining the catchiest elements of Milesian funk and Return to Forever with turntables and post-production effects that push the genre
forward.”
Kevin Convey, The Boston Herald

“ . . . successfully ties together so many influences that it can rightly be called its own distinct musical entity.”
New York Magazine

“ . . . facets of modal jazz, nascent fusion and polyphonic funk — on the surface an index of styles from the early 1970s — but the mood was neither allusive nor retro. Mr. Douglas, the trumpeter and composer, led what felt like an expedition.”
Nate Chinen, The New York Times

“As deep and challenging as anything he’s ever recorded, Moonshine remains an album that’s as much food for the heart and soul as it is for the mind, and continues Douglas’ remarkably unbroken
string of superb and uncompromising releases.”
John Kelman, All About Jazz

“ . . . where the funk of today meets traditional jazz head on with spectacular results.” “ . . . jazz is still very much evolving. With albums like these, Dave Douglas and his Keystone band are moving the
genre forward in all the right ways.”
BlogCritics Magazine