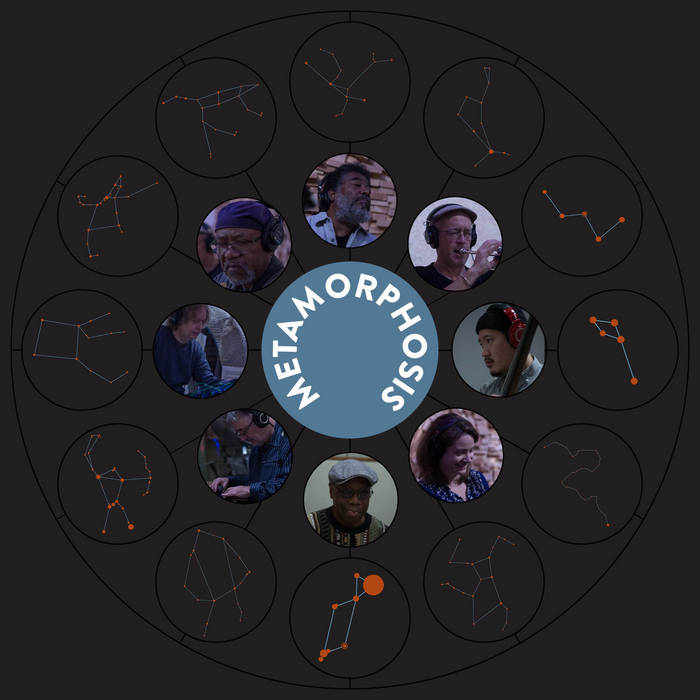 John Cratchley DD's monthly Greenleaf Subscriber release for 2017 complete...what to say; stellar line up, compositions of remarkable integrity but with room to allow utter freedom of expression...nothing new in that as this is Dave's default position...just immerse yourself in it and check out Greenleaf Records (and wonderful podcasts) if you haven't already..."a good deed in a naughty world"...

Metamorphosis is the new offering for 2017 on the Greenleaf Music Subscriber Series. It is a series of twelve short compositions, each named for a constellation in the night sky. The pieces of Metamorphosis are being released one per month throughout 2017 and can be heard exclusively by subscribers of Greenleaf Music.

Metamorphosis is a piece derived from the shapes of star formations and their associated stories in Greek mythology.

Who knows when humans started defining images among the stars in the night sky? By two thousand years ago, Ptolemy had published a compendium of constellations depicting Greek mythological figures. These mythologies were later laid out in Ovid’s narrative poem, Metamorphosis.

That call from the stars to human imagination seems eternal. Jazz and improvised music are well suited to fashioning sounds from these shapes and stories.

Improvising musicians have so many disparate skills and facets of creativity to work with. An experienced improviser today not only draws on jazz and other improvised music traditions – for over a generation, the training of an improviser has also encompassed sound-making as an individualized area of creativity that transcends style or genre and highlights the specific background and experience of the player. Wadada Leo Smith spoke of this in his seminal essay of 1973, notes (8 pieces) source a new world music: creative music.

Creative music invites each musician, through self-reflection, to define and interpret the music’s direction and to act independently within the parameters of a particular composition. To perform creative music, a musician, guided by their own individualized sonic vocabulary, interprets various kinds of notation and input. This demands creative flexibility and the ability to maintain one’s own personal voice among the interplay of disparate stimuli.

Interpreting star formations and their mythologies, as we do in Metamorphosis, draws on these skills and presents a new dialogue between individual, ensemble, and audience.

In bringing these pieces to the group, I found that each player had their own approach to the stars, shapes and stories. The improvisers in this group have vast experience, and many of them are musicians I consider my heroes. I am grateful that they brought themselves to this music and gave it the fullest life and breath it could have.

Ovid’s declared purpose was “to tell of bodies which have been transformed into shapes of a different kind.” In the same way, our Metamorphosis creates a new template for group improvisation, for the creation of new sound worlds.

Metamorphosis invites each player to invoke their own vision of the stars, the shapes, and the stories with the purest spontaneity and personal expressiveness."