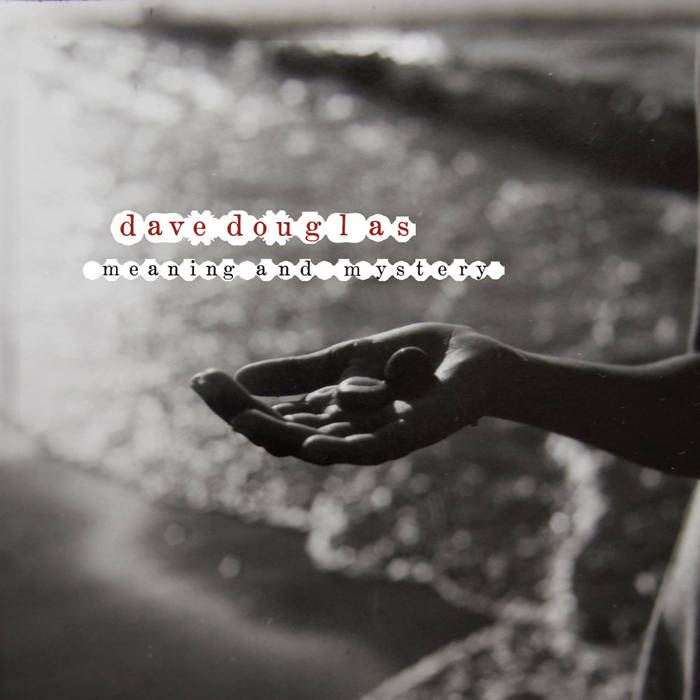 Meaning and Mystery is the third album from the Dave Douglas Quintet and first for the Greenleaf Music label. It follows 2004’s critically-acclaimed Strange Liberation and 2002’s Grammy-nominated The Infinite in building upon and establishing Douglas’ version of a modern living jazz quintet music.

Inspired by Miles Davis, the current work of the Wayne Shorter Quartet as well as more obscure groups such as those led by Julius Hemphill and Baikida Carroll to name a few, the album’s nine dynamic Douglas compositions reflect Douglas’ fascination with the worlds of poetry, visual arts, architecture, dance and film. Except for tenor saxophonist Donny McCaslin, who joined the quintet in 2005, each member of the group has played with Douglas for an extended period of time. Uri Caine (Fender Rhodes) has been with Douglas for fifteen years, bassist James Genus for over ten years, and drummer Clarence Penn for over six years. Each group member is a master musician with a clear and distinctive voice; Douglas wouldn’t have it any other way. “I like to hear individual expression, even in a group setting,” says Douglas. “I tried to write songs that could be approached with – that invite – personality, expressiveness, immediacy.”

With Meaning and Mystery, he has accomplished this goal and delivered an album of astonishing virtuosity and artistic vision.

Music goes by fast. Listeners who know the first two recordings of this Quintet will note that this is a considerably different vision of this band.

First of all there's Donny McCaslin, new to the band on this recording. He is a master of the tenor, as evidenced on Culture Wars, on the Sheik, and especially on Elk's Club where he just steams through the form of the tune. Donny is a complete musician -- he played his first concert in the band without a rehearsal or even a sound check (though it wasn't planned that way). His thorough internalizing of the music was obvious to all of us right away. His sound has become a part of the band and now has a part in shaping the band.

Uri Caine plays fender rhodes here, and something bugs me when it's talked about like a period instrument. It's as if no new music had been written for harpsichord since the 17th century, like it's some kind of throwback or freak show. The way Uri Caine plays the rhodes makes it very much alive. The rich ringing tone and the warm sustain of the instrument give it a magical blend with the bass and drums. It's a unique blend that flows from Uri's sensitive and tasteful hands.

Another crucial part of that blend is bassist James Genus. If he didn't play so many kinds of music this band wouldn't sound the way it does. The way James plays the bass line on Culture Wars simply makes me feel like playing. Plus he has to navigate getting that enormous instrument through the airports. He probably manages it the same way he holds down these grooves: he's unstoppable.

Drummer Clarence Penn knocked over his cymbal during The Sheik. It landed on the beat. You can hear it on this record at the end of his drum solo, and I still can't believe we played the melody after that. Clarence plays time in so many ways, you sometimes don't notice until it's too late. For example, at the beginning of this record he plays Painter's Way with at least a dozen shades of three. It's that flexibility that makes Clarence one of the most in-demand drummers in the business.

It should be obvious to anyone who has heard this quintet that I love Miles Davis, and when someone says I'm influenced by Miles Davis I'm flattered. But aren't we all influenced? Anyone involved in American music has to at some point deal with the language of jazz. Who could be more central to the modern vision of the music?

And as a jumping-off point for new quintet music what better place is there to start? There is room to grow from Davis' music because he created so many open roads. The many modes are loved and vilified, part of a legacy that still provokes inspiration and controversy. But the message in my opinion was not to stop there, but to keep growing, exploring and changing the sound and the context.

There are many others who's music has helped shape this quintet music: from the great Lee Morgan quintets, to Joe Henderson / Woody Shaw groups, to Cannonball and Nat Adderley, to Anthony Braxton / Kenny Wheeler, Julius Hemphill / Baikida Carroll, Tim Berne / Herb Robertson. Many of these groups are not given appropriate credit for the great expansions in music of the past decades.

This is far from an exclusive list -- this form of ensemble music is alive and well in the twenty-first century. It's not a throwback, it keeps growing forward. Wayne Shorter's recent small group has been a revelation: he continues to question everything -- to put everything at risk. And in so doing he forges new pathways in music. Hearing the way they play has been enlightening and has meant a great deal to me.

Writing these songs suggested new ways of thinking about all of that. Of course all the influences of the recent past are here. But I feel there's something universal in creating songs that hold up under reinterpretation. Songs that can be approached with -- that invite -- personality, expressiveness, immediacy.

Looking to liner notes for an explanation of music is like watching Breakfast at Tiffany's to find a good omelet recipe. The attempt to pin it down makes me feel like the poor tour guide on top of a double-decker bus in Times Square while the ball drops at New Year's. Music goes by that fast and it's shaped by so many other forces: relationships to poetry, to the visual arts, to dance and architecture and film. Music is crucial only inasmuch as it relates to life and culture. Jazz is definitely alive, it's vibrant and it's vital. Sometimes it makes sense, sometimes it's nonsense. But in the search for truth it is always bearing new fruit.

A complete set of sheet music is available that includes all of the Douglas compositions on this album. Download the lead sheets as PDFs here: bit.ly/SM_MeaningAndMystery