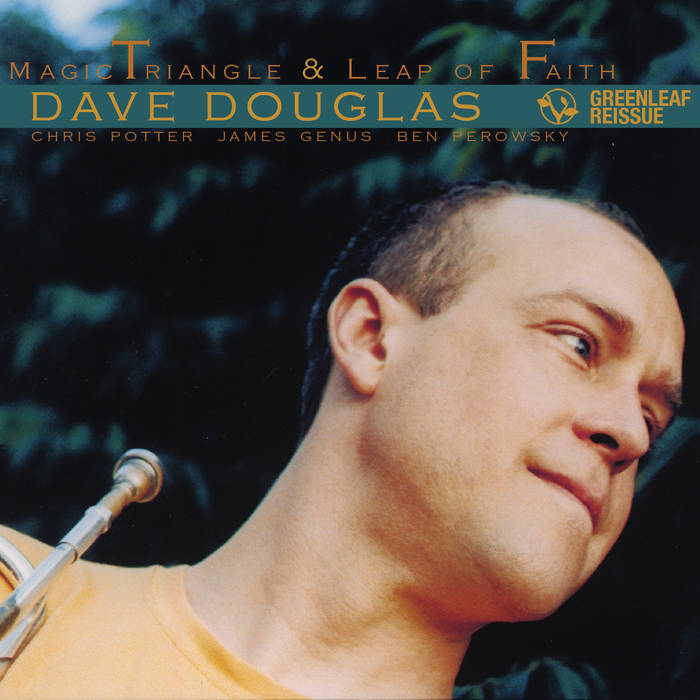 Greenleaf Music is proud to reissue Magic Triangle and Leap of Faith, two landmark albums by the always-innovative trumpeter/composer Dave Douglas. Originally recorded in the late 1990s, these two albums comprise the entire catalogue of the Dave Douglas Quartet featuring tenor saxophonist Chris Potter, bassist James Genus, and drummer Ben Perowsky, each of whom have remained crucial voices in the modern jazz world. Both discs highlight Douglas’ gift for dense, multi-hued compositions that draw equally from across the jazz spectrum, creating captivating environments for his collaborators to explore.

One of jazz’s most renowned trumpeters, composers and conceptualists, Douglas’ career is characterized by his restless imagination, continuous series of reinventions that present his compositional ideas in evolving and novel contexts. The quartet on these two stellar releases, offered here in a single comprehensive package, presented Douglas with the opportunity to write for three melodic voices.

As it turned out, those voices belonged to some of Douglas’ most fruitful collaborators: Potter, who has since founded the acclaimed electric group Underground, was an original member of the trumpeter’s long-running quintet. Genus continues to hold the bass chair in that group, as well as in the new Sound Prints Quintet with Joe Lovano, Lawrence Fields and Joey Baron, while appearing weekly as part of the Saturday Night Live band. Drummer Ben Perowsky has continually blurred the jazz/rock divide, leading his own eclectic Moodswing Orchestra and playing alongside the likes of John Zorn, Uri Caine, and Rickie Lee Jones.

“You ever notice how a four-legged chair is often crooked but a three-legged stool is solid?” Douglas writes in his brief liner notes. On 1997’s Magic Triangle, he continues, “I was trying to see how much harmony I could get into the game with just three notes.”

The answer is plenty, as the album’s nine diverse, harmonically-rich tunes prove. Magic Triangle is a gleeful exercise in shrugging off genre definitions, vaulting jauntily between post-bop burning and more jagged avant angles. “Everyman” starts the album off at a brisk tear, Douglas and Potter wending hearty, fluid lines around one another as Genus and Perowsky lay down a mighty, eccentric swing. The title tune follows with the horns musing tenderly over Genus’ contemplative pulse and Perowsky’s rainfall shadings. The album proceeds in similarly surmising fashion, from the Ornette Coleman-inflected zig-zags of “Padded Cell” to the tender miniature “Kisangani” to the off-kilter sprightliness of “Coaster.”

Originally released in 2000, Leap of Faith is exactly that – a headlong plunge into the unknown, brimming with excitement and mystery. Moodier and more intricate than its predecessor, the album presents a stunning evolution of both Douglas’ compositional range and the quartet’s brilliant interplay. “Though still with the concept of creating worlds with three voices,” Douglas writes, “the geometry got a lot more complex.”

That geometry manifests itself immediately with the elusive, idiosyncratic lines and hiccupping rhythms of “Caterwaul,” darkening for the stormcloud rumble of the title track. Shifting from the skittering rhythms of “Millennium Bug” to the cartoonish round-robin of “Emmenthaler” to the slippery bop of “Guido’s High Note,” Leap of Faith finds Douglas reinventing the group’s sound with each new track, and sometimes more than once within a single tune.

“We had a lot of fun playing with this band,” Douglas states simply, and the joy of discovery permeates both albums included within this welcome reissue. More than archival evidence of four modern jazz masters at an earlier stage of their respective careers, Magic Triangle and Leap of Faith offer two albums’ worth of agile musicianship navigating tricky, consistently surprising, and richly rewarding waters.

A complete set of sheet music is available that includes all of the Douglas compositions on this release. Download it here:
bit.ly/SM_20PiecesforQuartet